China has promised to continue funding infrastructure projects under the Belt and Road Initiative in Africa, despite growing criticism that the investments burden countries with debt.

In the Kenyan capital Nairobi on Wednesday as part of a four-day trip to Africa, Chinese President Xi Jinping’s special envoy, Yang Jiechi, said Beijing was committed to continuing partnering with Kenya and other African countries through the belt and road, a multibillion-dollar plan by the Chinese government to link China, Europe, and Africa through investment in rail, roads, ports, dams, power plants and bridges.

Delivering a message from Xi to Kenyan President Uhuru Kenyatta, Yang said infrastructure projects under the umbrella of the belt and road and the Forum on China-Africa Cooperation, an official forum between China and African states, were aimed at fostering intra-Africa commerce and inter-regional trade between Africa and Asia.

As part of the belt and road, Beijing is funding and building the Standard Gauge Railway. The first phase of the rail line, from the coastal port city of Mombasa to Kenya’s capital, Nairobi, was completed in 2017 and cost US$3.2 billion. The second section, linking Nairobi to Naivasha, a town in the Central Rift Valley, is nearly done, at a cost of US$1.5 billion.

The plan is for the railway to reach Malaba, a town on Kenya’s western border with Uganda, where construction will continue into Uganda and other landlocked countries in the Great Lakes Region.

But Kenya has yet to secure funding for the third phase of the railway linking it to Kisumu and on to the Malaba border crossing. At that point, Uganda would take over construction to extend the line to Kampala and beyond

China had said Kenya needed to redo a feasibility study to prove the project’s commercial viability before it would release the funds.

For the rail line to make business sense, it must reach Uganda, to connect with South Sudan and Rwanda and possibly to the mineral-rich Democratic Republic of Congo.

On Wednesday, there was no word on whether China had agreed to advance the US$3.8 billion in loans needed for the Kisumu link but Yang said the new railroad was needed to develop industries on a wide scale in Africa and create jobs.

He said Beijing was willing to work closely with Kenya to ensure safe and efficient operation of the new rail and to support the East African nation to develop the economic belt and industrial park along the line.

“With the railway, we can have industrial parks, all kinds of trading activities,” China’s top diplomat said.

“With the railway, there will be easy access, efficient access to products to markets either in Africa or in China or in other continents.”

In addition, Yang said China would “strengthen coordination and cooperation with Kenya in international and regional affairs”.

The assurance comes as Kenya is seeking a non-permanent seat on the United Nations Security Council. 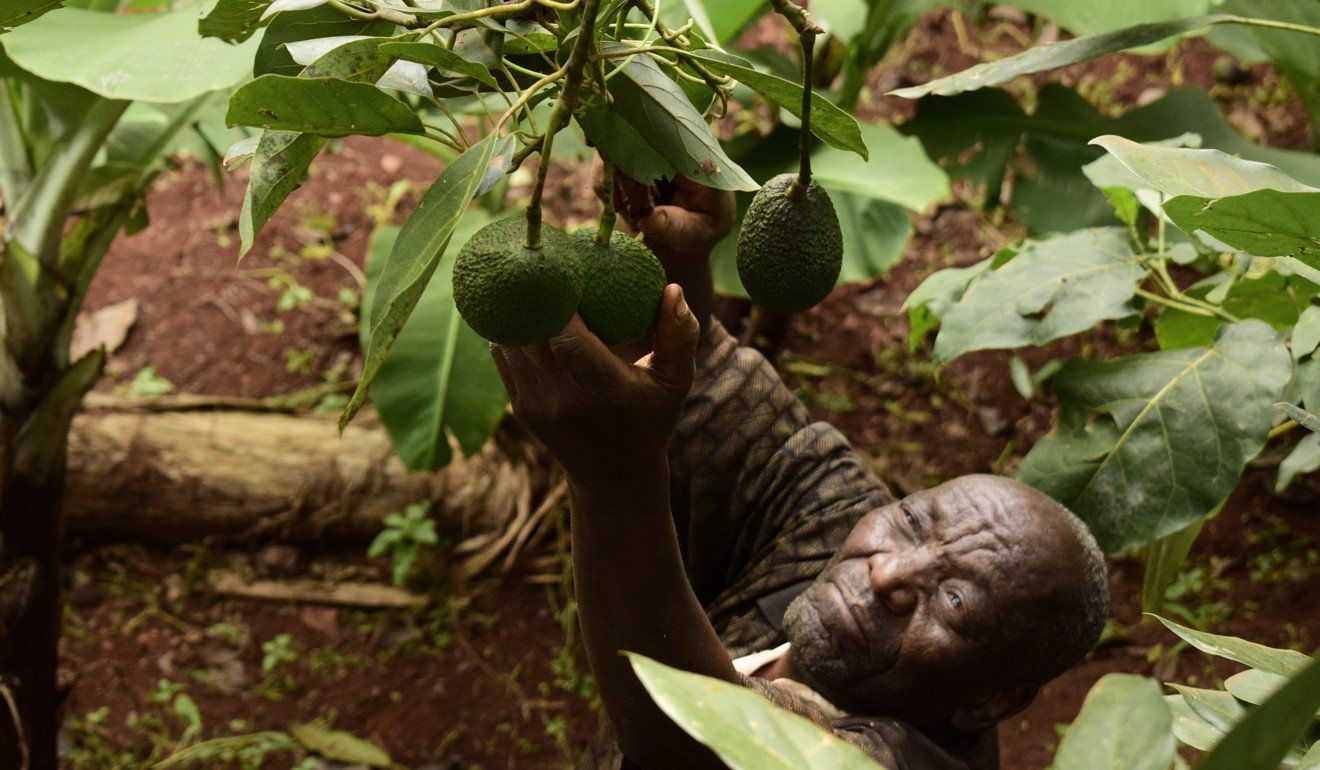 With Kenyan avocados being sold in China, Kenya wants to see even more Kenyan products on Chinese shelves. Photo: AFP

At the meeting, Kenya also pushed for Beijing to open its market to allow more Kenyan products. With avocados recently gaining access to the expansive Chinese market, Kenyatta said he would like to see even more Kenyan products, especially tea and coffee, on Chinese shelves.

Yang promised that China was working on opening up the Chinese market to more Kenyan products to narrow the trade imbalance between the two countries.

Beijing is the largest bilateral lender and trading partner with the east African nation. Last year, China exported US$5.19 billion of goods to Kenya while buying US$173.96 million of its products.

Kenyatta also said Kenya’s cooperation with China had allowed his country to make strides in development and helped it and the region opens up for more trade.

He said the infrastructure projects Kenya had undertaken with Chinese funding were helping to connect the region, attract investment and create jobs.

“We need to really now focus on how we can work together to get our private sector, our investors to work more closer together,” Kenyatta said in a statement.

“How do we attract Chinese investors, manufacturers, industrialists, and other business people to invest in Kenya?”

Through Yang, Kenyatta invited Xi to visit Kenya during the Chinese leader’s next visit to Africa.

The Chinese official also will go to Sierra Leone, in an apparent attempt to mend fences with the West African nation following its cancellation last year of a US$400 million China-funded airport project.

The new airport had been commissioned by then-president Ernest Bai Koroma but was cancelled by the new government after Koroma’s election defeat in March 2018.

The special Chinese envoy is in Africa as Beijing faces growing competition in Africa from countries such as Japan, the United States, France, Russia, and the United Arab Emirates, all of whom would like a piece of Africa’s resources and product markets. 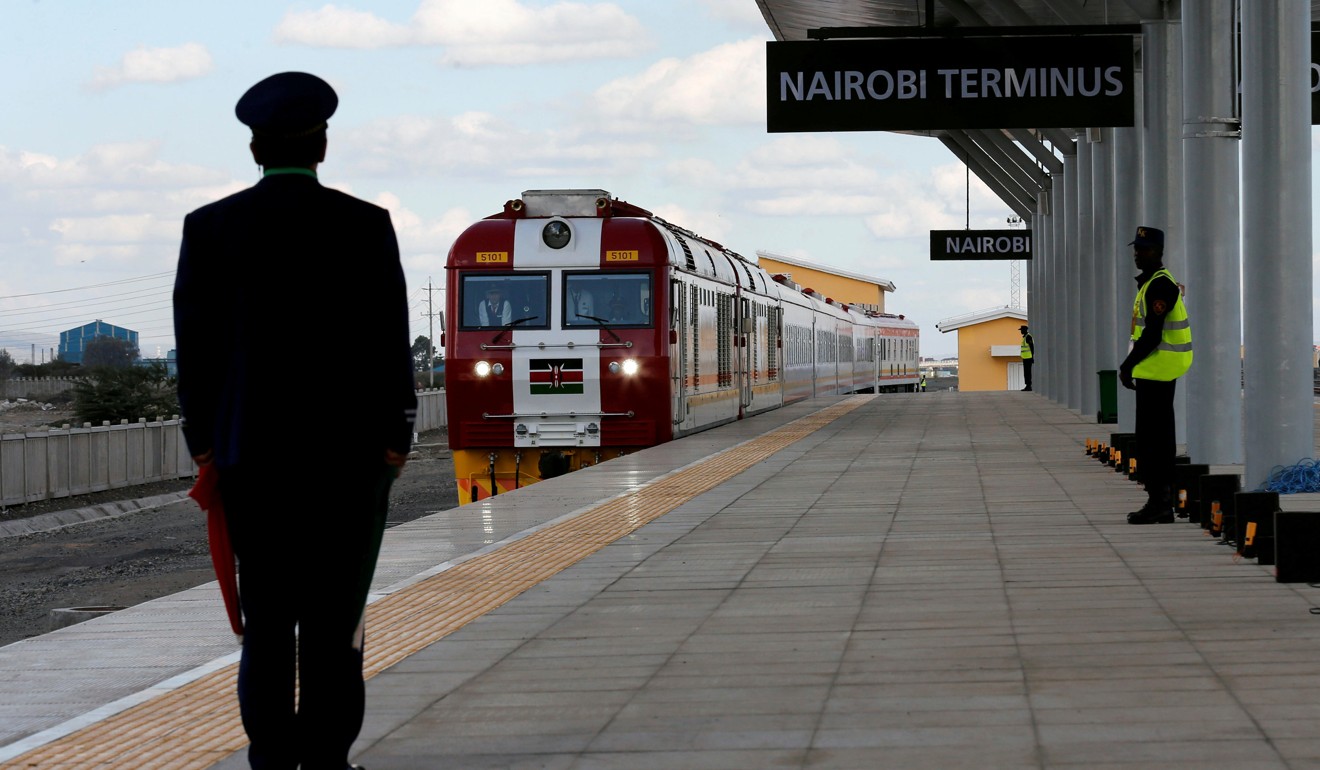 A train arrives at the Nairobi Terminus on the outskirts of Kenya’s capital on the China-financed Standard Gauge Railway line. Photo: Reuters

For instance, early this year, the administration of US President Donald Trump unveiled its Prosper Africa Initiative, which aims to support US investment in Africa.

Last year, Trump created a US$60 billion agency – the US International Development Finance Corp – to respond to China’s growing influence in Africa and South America.

Japan has also made it clear that it intends to take on Beijing in Africa by encouraging its companies to invest in the continent, where it sells its investments as “quality alternatives” to Chinese ones.

Beijing also is fighting criticism from the West that it’s lending practices in Africa are a “debt trap”, offering loans to countries that cannot afford to repay them.

China has dismissed the accusations, saying it is helping Africa to grow while other countries are abandoning the continent.