Presight co-founders Rosemary Fuller and Simon Yin win the $30,000 first place prize at the Wednesday’s VentureCat Showcase 2019. The founders said they will use the money to help fund a bench study for their safer ROP screening technology.

Presight, a startup founded in Fall 2018 by Kellogg graduate students Rosemary Fuller and Simon Yin with the goal of creating a more harmless way to screen infants for retinopathy of prematurity, won first prize and $30,000 in funding at VentureCat’s third annual student startup competition Wednesday.

“We couldn’t be more excited,” Fuller said. “It took a lot to get here, and we wouldn’t be here if it weren’t for all those who supported us.”

In their presentation, Fuller and Yin said the $30,000 will go toward a bench study for their proprietary tear-gathering method before clinical trials for U.S. Food and Drug Administration approval. The tear method offers a harmless alternative to damaging ROP eye-prying exams, which are administered about 500 times a day. With Presight’s new system, screenings could be performed by bedside nurses using the VEGF protein found in natural tears to reduce harm to infants.

“By supporting Presight today, you’re supporting the lives of our tiniest patients,” Fuller said to conclude the group’s presentation.

Fuller and Yin pitched their medical startup to an audience of approximately 300 students, faculty and business leaders who came out to celebrate and honor the aspiring entrepreneurs at the Kellogg Global Hub. VentureCat is an annual competition commissioned jointly by The Garage, Kellogg Entrepreneurship, the Farley Center and the School of Law.

Melissa Kaufman, the executive director of The Garage, NU’s startup initiative, served as master of ceremonies for the showcase and said she’s seen a renewed excitement for entrepreneurship in recent years.

“We’re seeing a huge explosion in the number of students registering for entrepreneurship classes, even directly out of high school,” Kaufman said.

Kaufman said The Garage seeks to support entrepreneurial students by providing them with as many resources and opportunities possible. She added that the competition seems to get tougher each year. 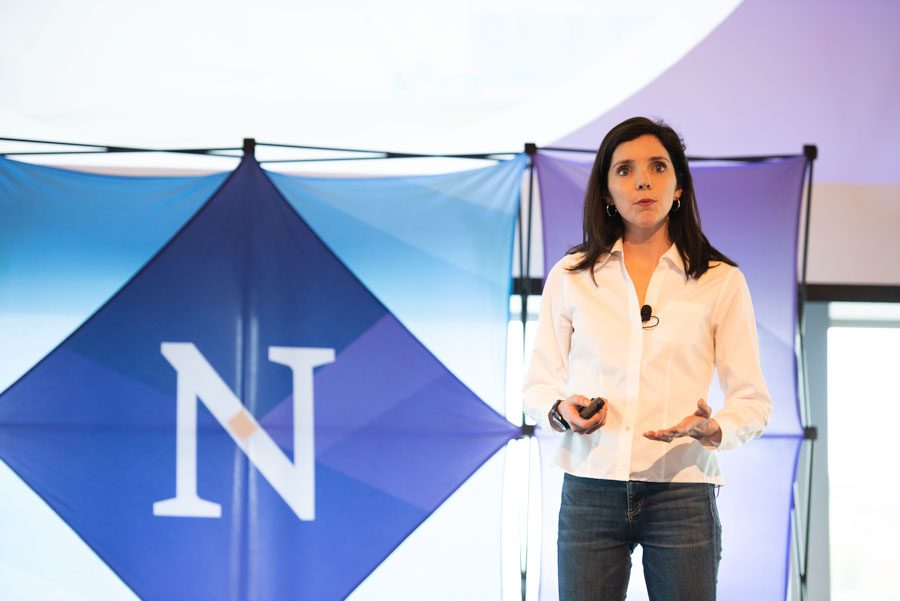 “Now that we have a community of entrepreneurs on this campus, there’s a real opportunity to support and encourage each other.”

That competitive atmosphere appeared at the showcase when audience members were asked to vote for their favorite startup. This time, breast pump startup Maziwa won the vote, and took home an extra $2,000 in addition to their $5,500 finalist prize.

The Maziwa all-women team is working to bring specially designed breast pumps to disadvantaged mothers in Kenya. The startup’s founder, Sahar Jamal, came up with the idea after witnessing the breast milk scarcity firsthand in her travels to southern Africa and said she is planning to move to Kenya in the fall.

Other finalists included Slate, an online marketplace personally matching customers to tattoo artists, LimeLight, a data collection chip that will help grow cannabis more efficiently, and Dindin, a more accessible banking solution for Brazilians. Though all pitches were well-received by the audience, there was special applause when Kellogg student and LimeLight founder Phil O’Brien joked that the company’s tech is going to help cannabis “grow like a weed.”

The 2019 showcase also featured a keynote address by Lyft COO Jon McNeill (Weinberg ‘89). Like Kaufman, he expressed his excitement for the recent booming interest in entrepreneurship at Northwestern, noting the underrated status of entrepreneurship classes during his time at NU.

“Northwestern has been setting a bar on this campus,” McNeil said. “Good education does that. It demystifies things which are hard to understand.”

An article published in Thursday’s paper titled “VentureCat awards $54,000 to student startups” had an incorrect award total in the headline. Upon including semi-finals prizes, VentureCat awarded $102,000 in total. The Daily regrets the error.